skip to main | skip to sidebar

The neuropsychology of Multiple Sclerosis (MS) 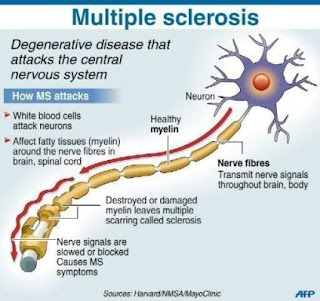 People with Multiple sclerosis (MS) represent a core client group for the work of a Clinical Psychologist working in Neuropsychological rehabilitation. The first blog I’ve chosen to post is centred upon MS.

MS is a disease of the central nervous system (CNS) marked by numbness, weakness, loss of muscle coordination, and problems with vision, speech, and bladder control. It is an autoimmune disease in which the body's immune system attacks myelin, a key substance that serves as a nerve insulator and helps in the transmission of nerve signals. The progress, severity and specific symptoms in MS are unpredictable. One never knows when attacks will occur, how long they will last, or how severe they will be. Most people with MS are between the ages of 20 and 40 at the time of diagnosis. The term "multiple" refers to the multiple places in the CNS that are affected and to the multiple relapses and remissions characteristic of MS.
MS causes demyelinization of the white matter of the brain, with this process sometimes extending into the gray matter. Demyelinization is loss of myelin, which is composed of lipids (fats) and protein. The white matter is the part of the brain which contains myelinated nerve fibers and appears white, whereas the gray matter is the cortex of the brain which contains nerve cell bodies and appears gray. When myelin is damaged in MS, nerve fiber conduction is faulty or absent. Impaired bodily functions or altered sensations associated with those demyelinated nerve fibers give rise to the symptoms of MS. Watch this clip on you tube for a quick run down on physiology:

The understanding of the basic causes of the disease is notably incomplete. It is known that nerve cell death is part of the nervous system injury in MS. It is known, too, that in MS some types of blood cells, namely lymphocytes and monocytes, gain access to the central nervous system by breaking through the blood-brain barrier at sites of inflammation. The migration of these cells across the endothelium (lining of the blood vessels) and the activation of these immune cells depends on the cell surface molecule called integrin.
Ref: http://www.medterms.com/script/main/art.asp?articlekey=4457

From a neuropsychological point of view MS often affects higher order cognitive functioning, typically causing deficits in speed of information processing and memory (cued and visual). In addition deficits in attention, executive function and verbal fluency are often reported and in some cases visuo-spatial problems. Cognitive deficits are one of the main symptoms of MS although they are often mitigated by stress and low mood. Intact abilities often include, rate of learning, liklihood of remembering a specific item based on when it was presented, identifying semantic characteristics of learned material, and incidental learning (learning without the need for significant attention). Recognition of these deficits is relevant both to the diagnosis and rehabilitation of this disorder.

Lazeron et al. (2006) looked at the neuropsychological profile of patients with MS. In the study thirty two patients with MS undertook MRI scans and thorough neuropsychological assessment.
Results indicated a decrease in the speed of processing and response speed stability, and a decrease in psychomotor accuracy and stability were clearly associated with less brain volume, and with higher lesion loads, in particular at frontal and occipital areas. Correlations with brain volume reduction were found for all domains, except for visuo-spatial processing. In particular, speed and speed fluctuation scores correlated with brain volume reduction, while accuracy of performance, in general, did not correlate. Only some test speed scores and speed fluctuation scores correlated with lesion load measurements. This study showed that, in MS patients, accuracy of processing is not compromised unless high working memory demands are involved. Problems in neurocognitive functioning in MS are mainly modulated by speed and stability of speed processing, in particular when attention-demanding controlled information processing is required. Abnormalities in these domains are most strongly associated with brain volume loss, confirming that pathology beyond focal lesions is important in MS.
Ref: http://msj.sagepub.com/cgi/content/abstract/12/6/760

For people with MS the emotional aspects of living with a long-term condition can prove just as challenging as the physical aspects of the condition. MSis a major cause of neurological disability in young adults. There are at least five major factors of psychological adjustment to MS:

2. The quality of family support
The second factor of psychological adjustment to multiple sclerosis is the quality of support available to the patient within his family. All stakeholders should have an idea about the family dynamics before, during and after diagnosis. They should ask the following questions: Does the patient have a life together? What kind of relationship the patient has with his close relatives (children, spouse, and extended family)? The answers to these questions are important because the psychological suffering of a patient may result from tensions within his family (rejection, stigma, exclusion, indifference). Often a psychological maltreatment develops between the patient and his relatives; they feel unable to bear the daily progress of the disease.

3. The skills of social openness
The skills of social openness are the third factor of psychological adjustment to multiple sclerosis. They in fact correspond to how the patient is able to seek support and mental peace in his surroundings especially his family and friends. It helps the patient feel supported in the unhappy moments. Continuing his or her job helps the patient cope up with the new realities associated with the disease because continuing work lifts up the spirit of the patient and fills him with the feeling of productivity.

4. The quality of the relationship with the health professionals
The quality of the relationship of the patient with the health professionals (in the broadest sense, which also includes paramedical workers also) plays as a factor in psychological adjustment to multiple sclerosis. The patient has a high level of dependence on his doctor for psychological support as well as for the management of the disease.

5. The disease
The disease and its prognosis play an important role in the psychological adjustment of patients with multiple sclerosis. If the disease progresses slowly, the patient gets accustomed to his newly acquired disabilities gradually but if the disease has a rapid progression, the patient can not adjust and his life is compromised both physically and psychologically.

What can a clinical psychologist contribute to an MS service? Boot et al. (2008) report the results of a team audit.

What support was offered by the clinical psychologist?
The number of sessions offered was agreed between the clinical psychologist and the person with MS. People attended an average of three sessions, on a monthly basis. However, up to fifteen sessions were arranged, depending on individual requirements. A broad range of psychological interventions was provided. For some people, exploring options for change and being given self-help information about low mood, anxiety, falls and relationship difficulties was enough. Psychological therapy was used with people whose difficulties were more complex. Clinical psychologists learn a range of therapeutic approaches during their training. Different approaches were integrated in a way that best fit with the person and the problems they were experiencing. Partners and other family members were included at times so that they could discuss the best way of adjusting to the situation together. When problems with memory and thinking were identified, strategies to support these difficulties were developed. Some support over the telephone in conjunction with self-help information was occasionally provided for people who were unable to travel to the MS clinic.
According to Boot et al. (2008) psychological input can have benefits in the following areas:
• Managing their mood better
• Coping better
• Improved levels of daily activity
• Better understanding of their difficulties
• Improved relationships
• Less prone to feelings of suicide
• More confident about managing their future with MS.

Conclusions
This audit highlights the range and varying complexity of difficulties described by this group of people with MS, who were referred to a clinical psychologist. It shows how a number of different factors in people's lives can contribute to emotional difficulties. A flexible and individualised approach was used to provide psychological interventions that fit with the person and the problems they are experiencing at that time. The process facilitates individual management of emotional difficulties and encourages the individual to seek further support should they feel the need in future. These processes meet the government directives on managing long-term conditions, which promote self-care.